In 2019 he did it with his great grey gelding Clouzot du Lassus and today young Swiss star Bryan Balsiger did it again when winning the highly competitive opening leg of the Longines FEI Jumping World Cup™ 2022/2023 Western European League with the mare Dubai du Bois Pinchet.

“Since the beginning of the year Dubai has been the number one horse in my stable and we’ve been having good results together. I knew we could do more and I was waiting for a big win, so I’m over the moon with her! She has a lot of temperament but I know her well and she gives me everything – and more!”, he said this evening after pinning the host nation’s Victoria Gulliksen into runner-up spot and Ireland’s Eoin McMahon into third. 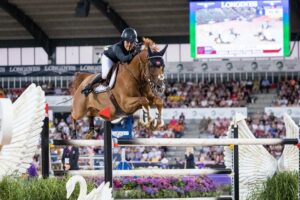 Today’s launchpad for the Western European season certainly didn’t disappoint, with a sparkling line-up and a course to match. On his Oslo debut, Swedish course designer Peter Lundström certainly didn’t hold back. He knew he was catering for a world-class field and his 14-fence track was up to height and demanding of everyone’s full attention.

The Telenor Arena is compact, and for the first big indoor event of the season that always proves a challenge for horses that have been jumping outdoors over the summer.

Ireland’s Eoin McMahon set the jump-off target when pathfinder with Ludger Beerbaum Stables’ 12-year-old grey mare Chakra who broke the beam with a clear round in 46.13 seconds. That always looked beatable, but two more took their turn before Balsiger blew the competition wide open when scorching through the finish almost five seconds quicker, in 41.38 seconds, to really put it up to the rest of them.

Germany’s Daniel Deusser, 2014 series champion, looked really threatening when sixth to go with his big-winning mare Killer Queen VDM. But a slip on the roll-back to the two remaining elements of the triple combination halfway around the jump-off track put paid to their chances as they hit the second element, although their four faults in 42.76 seconds would still be good enough for sixth place at the end of the day.

With two Norwegians through to the timed decider the home crowd had a whole lot to cheer about and, next to go, Victoria Gulliksen set them alight with a brilliant round from her ever-reliable chestnut gelding Equine America Papa Roach who cleared the course in 43.62 seconds to slot into runner-up spot.

And when promising young Dutchman, 22-year-old Lars Kersten, steered Emmerton home clear in 46.80 for fourth place and Norway’s Marie Valdar Longem brought Echo de Virton home in 47.12 seconds for fifth, then Gulliksen maintained her second-place finish behind Balsiger and ahead of McMahon.

The partnership between Gulliksen and the 13-year-old Papa Roach has long been a special one, and there was a whole lot of Norwegian happiness this evening.

Talking about her ride at the end of the first round, the 30-year-old athlete said, “it was a crazy feeling, an adrenalin-kick like I never experienced in my whole life! Without that horse I would never have jumped clear. I was missing totally to the last fence but he jumped it. But he does everything for me because he

loves me and I love him, and he just knew he had to jump clear today and he was really working for it! I couldn’t be more happy to have a clear round for the first time in the World Cup on home soil!”

And then she went out and did it again…. 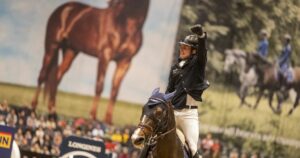 Meanwhile Balsiger reflected on his success. “I always knew Dubai could do big sport, but something was missing until today and now I have the feeling that this is just the beginning at this level and I’m very excited for her!” said the rider who plans to also bring the 13-year-old mare to the second leg of the WEL series in Helsinki, Finland next Sunday.

Asked about winning twice in Oslo, he said that he came well prepared on both occasions. “When we plan go to a World Cup qualifier I always have my horses ready because it is a big opportunity to ride for your country at this level and I just want to do my best”, he pointed out.

“I needed luck today, but after three years you know how difficult it is to win at World Cup shows. It doesn’t happen every weekend and it’s a brilliant achievement that can only happen with the help of my great horse and all of my team, my sponsor and trainer and my groom – I am so grateful to them all for believing in me and my horses!”, he said.