Knock-Out Dressage presented by Kultajousi ended the international dressage program in this year’s Helsinki Horse Show. Emma Kanerva and Dambacu NI continued their perfect weekend and took the win with the result 100%. Dina Ellerman on Landy’s Akvarel was second and Maria Pyykönen on Zelle placed third.

I was thinking, we are in the ice hall, what would be more typical than a hockey player. I wanted something else than just a few Finnish flags and when we got that little stick to add to the look, I think it turned out pretty fun, Kanerva said about her look.

I was quite surprised but happy that Dambacu was so calm today, I would have expected him to be a bit tense maybe but actually, he was even better than yesterday in Kür. I haven’t done a knock-out in dressage before so it was of course a bit challenging because you had to keep an eye on the other rider as well but it went great and I had fun, Kanerva commented on their performance.

During the winter I plan to do some indoor competitions and I have given some thoughts to the World Cup as well, but let’s see how the indoor events go first. The European Championships are my main goal next year and after that, the Olympics in Tokio in 2020. 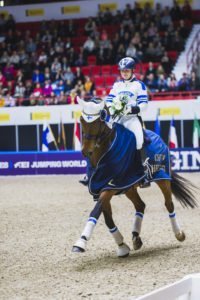 Also the judges enjoyed the Knock-Out.

For us this is just like any other class, we judge it the same way. But, it is really fun to follow and puts a smile on our faces as well, Paula Nysten, one of the judges, said after the Knock-Out.

It was great to see that many of the horses were even better than yesterday in Kür and there were a lot of parts that we usually don’t see those horses performing so well on the course. This class always gives a really nice feeling when you see the horses giving their best and I think also the riders can be a bit more relaxed, Irmeli Summanen commented the Knock-Out.