All quality events use fibre sand nowadays. Are there at all any natural sand events anymore?


What´s your summer program in footing?

As FEI footing expert for the Olympic Games in Tokyo 2020 I am in Tokyo right now (1st week of July). 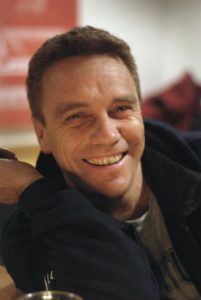 From mid of July to early august I will maintain the footings at “CSI – International Bromont” in Canada.
From 12. – 30. August I will maintain the footings at the Asian Games in Jakarta/ Indonesia.
Then rushing immediately to Tryon in North Carolina in US as FEI footing expert for the World Equestrian Games 2018. Then directly by the CSI-W American Gold Cup in North Salem/NY.
Back home to see my family in Malaysia on 3rd of October and stay with them for about 8 days. Some short meetings in Thailand before I travel to Helsinki on 13. October. I´ll give my best to keep up the great sport and spirit of HIHS!

You are one of the few actual experts on footing. Who was you mentor in the beginning?

Herman Duckek was the one who thought I may have the feeling for sand as he had in his time. Herman Duckek was the so called “Duke of Dirt” or “Bodenpapst” in German. Hermann was the authority in footings from 1974 until 2000. He was responsible for the Olympic footings from 1976 in Montreal until 2000 in Sydney. Even though he never let me participate at “his Olympics” I developed my own feeling for sand by doing countless shows with him.
In 1995 Toni Waser from Switzerland became a kind of our team member as well and from Toni I learned most of the technical and engineering aspects in terms of footing design and maintenance. Without these two ”guys” and my own ambition to never stop learning and never leaning back on previous success I would have never got the trust of riders and officials and probably I would have never met Tom Gordin!


You´ve been the footing responsible in Helsinki now for over 10 years. The riders and horses love you. What are you expectations for the up-coming CSI-W5* event in October?

We always learn that the best of yesterday may be just good today and average tomorrow. Of course I want to keep the footing quality rated as one of the best in the world. To present the best in the world footing at HIHS because the great spirit of the show. This goes from the entire team behind the scenes all the way to the enthusiastic spectators. They all deserve great sport which needs an excellent course designer like Gui and of course a top class footing.