The top dressage riders took the centre stage in Helsinki on Saturday morning when it was time for Dressage Grand Prix Freestyle presented by RTV. Yesterday’s Grand Prix winners Jeanna Högberg and Astoria delivered another stunning performance earning 75.355% from the judges. 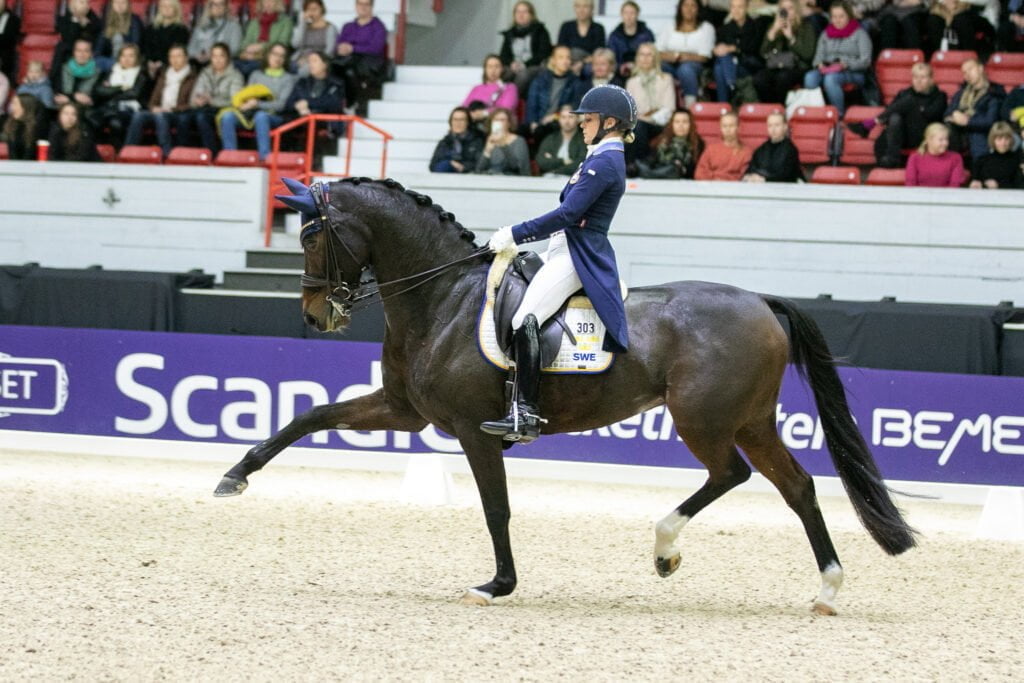 The Helsinki double winner was happy with their performance but also found place for some improvement.

“There was still some tension but it’s getting better. Today I think I was more the problem; I have to know my music better. It’s actually made for another horse, Lorenzo, but I’ve been riding Astoria two or three times with this music. But still, I’m not always in the right place”, Högberg said after the competition.

“As I said yesterday, I think she’s got everything and she doesn’t really have weaknesses. Of course, everything can be better but I love the way she canters and the way she drops. We still need to improve the piaffe and passage and the pirouettes but she’s only ten years old and I have big hopes for her”.

Sweden took yet another double victory in dressage for this weekend when Jennie Larsson and Bonafide placed second with the result 74.700%.

Maria Pyykönen and Furst Wild S thrilled the home crowd by placing third with the result 68.710%. The Finnish championships bronze medalist was happy with their performance especially after yesterday’s challenges.

“Actually today he was really good, he was still a little bit tense but he was totally with me and went everywhere I told him to go so I was super happy compared to yesterday. I think the collective movements – the piaffe and passage – are his highlights and my freestyle has quite many difficult movements and I think we managed to do them today quite OK”, Pyykönen commented their performance.

The judge Paula Nysten enjoyed the freestyle and praised the horses and riders for performing so well despite the challenging and exceptional arena where everything is a bit too close.

“I think the top was very good today. Jeanna’s horse moves so beautifully, I cannot just take my eyes off that. And Maria, I’m so happy she was third today and did a really great performance”, Nysten told in an interview.

Both Högberg and Pyykönen are taking part in the Knock-Out tomorrow and the class will also have a new judge coming from abroad as Henri Ruoste is supposed to be judging in the weekend’s third dressage class.